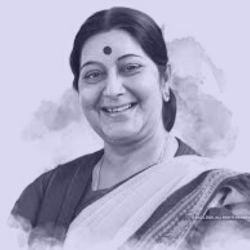 In a world riddled with political conflicts, there are few who rise above. Fewer who leave a mark. Who truly believe in the concept of public service. Sushma Swaraj was one such exceptional woman.

She was born in Haryana in 1952, where her father was a prominent RSS member. She followed his footsteps and her political career started at a very young age when she joined Akhil Bharatiya Vidyarthi Parishad in her 20s. In fact at the age of 25, she became the youngest Cabinet Minister of the Indian state of Haryana and later became the Chief Minister of Delhi. It’s is absolutely commendable that she was elected a Member of Parliament, a total of seven times.

Sushma Swaraj was more than just a politician. She had a a strong educational background in law and was a Supreme Court advocate.

Though she held many significant portfolios, her most recent one as the Minister of External Affairs from 2014-2019, won her many admirers in India and abroad. Her fabulous use of of social media to reach out to Indians and help them during trying times has been applauded by all.

She is the Indian Parliament's first and the only female MP honoured with the Outstanding Parliamentarian Award. Sushma Swaraj impressed everyone at the 73rd United Nations General Assembly in New York.

Her feisty yet humble personality, will always be an example of women empowerment. Her impeccable and passionate speeches will always be remembered. Her prompt responses to the tweets of distressed Indians will be sorely missed.

SoulPrints pays tribute to a wonderful woman, politician and humanitarian. May there be more like her.