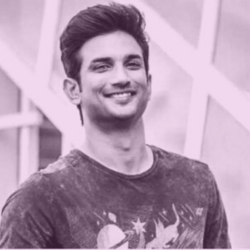 All of just 34 in life and barely 10 in the world of cinema, this shooting star in all his stride, took on this enviably dazzling yet wickedly competitive world of entertainment.

Made his mark enough to secure a special place for himself, as he attained stardom, donning some memorable roles in Hindi cinema.

Endearing himself as a star of the small screen in a couple of TV productions, announced his entry into the big screen with a remarkable film Kai Po Che. There was no looking back to this extremely hard-working and go-getter of an actor who starred in many hit films, most notably MS Dhoni: The Untold Story and PK.

Never ending youthful energy, dynamism, spontaneity and his smile made him the star adored by the fans. His undeniably likeable screen presence stood him apart from the rest of the young actors of his generation.

An inspiration for many young aspiring actors, a cool actor with some memorable performances, a bundle of energy and youthfulness and with a smile that was so likeable….Sushant Singh Rajput was a super ‘shooting’ star indeed, that seized before it could shine to its fullest glory.

Gone too soon…yet your glorious acts on screen and the memories of you as an actor will live on forever.

This is a SoulPrints tribute to Sushant Singh Rajput.

We will miss you .. Sonika