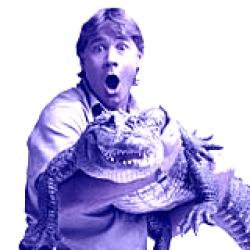 He was born as a child in love with the wild. Not surprisingly so when both his parents were wildlife experts and rehabilitators. This little boy had his wild play area among the crocodiles and other reptiles in their own small Queensland Reptile and Fauna Park started by his parents. And this is what defined the start of a great story that featured this little hero Steve Irwin who will always live in a millions hearts around the world for the wildest reason.

As a little boy who appeared to have gotten rid of fear even before he really knew what it was to be scared, was involved with the park in many ways such as daily animal feeding, care and maintenance activities and so on. His first wrestle with a croc was at the age of nine. And thus he grew up as a volunteer capturing over 100 crocodiles, some of which were relocated, while others were housed at the family park. Steve Irwin took over the management of the park in 1991 and renamed it as Australia Zoo in 1992. The rest was history. Steve found his life partner in another animal lover and their first footage of their honeymoon video became the first episode of The Crocodile Hunter - the most successful television series around the world. Irwin's exuberant and enthusiastic presenting style, broad Australian accent, signature khaki shorts, and his signature phrase "Crikey!" became known worldwide.

The Irwins were happily married couple who avoided wearing wedding rings as they believed that in their line of work, wearing jewellery could pose a danger to the animals and themselves. Such was his love for the wild animals. As a little boy he Irwin discovered a new species of turtle. Later given the honour of naming the newly discovered species, he named it Irwin's turtle after his family. And later in the year 2009, another newly discovered Australian animal - a species of air-breathing land snail was named Crickey Steveirini, after Irwin's family in 2009. American satellite and cable television channel Animal Planet ended The Crocodile Hunter with a series finale titled "Steve's Last Adventure." The last Crocodile Hunter documentary spanned three hours with footage of Irwin's across-the-world adventure in locations including the Himalayas, the Yangtze River, Borneo, and the Kruger National Park. Irwin went on to star in other Animal Planet documentaries, including Croc Files and many others.

Steve Irwin's end came in the most unlikely fashion. His death is believed to be the only fatality from a stingray ever captured on video.  Steve's daughter keeps his legacy alive following his footsteps with her own show, a plan realised after his death as the series Bindi the Jungle Girl.

This is a SoulPrints tribute to the one and only "The Crocodile Hunter" Stephen Robert "Steve" Irwin who will always be remembered as a legendary wildlife expert, television personality, and conservationist.