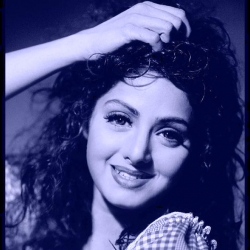 As a dreamy village girl Mayilu playing a pivotal role in 16 Vayadhinile alongside a big star Kamal Hasan and a then budding actor Rajnikanth, to the endearing Viji in Moondram Pirai, to the gorgeous Chandini swirling pastel sarees, to the inspiring mother in English Vinglish to the calm yet fiery mom in MOM, Sridevi was not just an actress, she was a diva. A woman from the small town of Sivakasi in Tamil Nadu who dared to dream big. And who chased it till she conquered every bit of it.

Sridevi was born as Shree Amma Yanger Ayyapan in 1963 and was given the name Sridevi, when she made her debut as a child artiste at the age of 4 in the Tamil film Kandan Karunai. That was just the beginning of a long and illustrious career filled with fantastic roles, iconic songs, prestigious awards and a fan following unparalleled.

After a successful stint in South Indian cinema, Sridevi moved on to win over the Bollywood fraternity. In fact, she is considered the first ‘female superstar’ of Hindi cinema. She made her Bollywood debut with Rani Mera Naam in 1972 as a child artiste but her first starring role was in the 1979 drama Solva Sawan. She won hearts by matching Jeetendra step to step in Himmatwala and continued to do a series of brilliant films with the best of superstars such as Kamal Hasan, Rajnikanth, Amitabh Bachchan and Anil Kapoor.

Her most popular films that defined her career were 16 Vayadhinile, Meendum Kokila, Moondram Pirai, Kshana Kshanam, Jagadeka Veerudu Atiloka Sundari, Mr. India, Chandini, Nagina, Chaalbaaz and Lamhe. Her comic timing was bang on, her dance moves swoon-worthy, and her personality shone through each character. The incredible role she played in Monogram Pirai (Sadma in Hindi) with Kamal Hasan will always be remembered as one the best roles played ever and she excelled with ease. Be it the demure Anju or the fiery Manju, for Sridevi, any role was a cakewalk.

She pocketed many awards along the way and in 2013 she was conferred with the Padma Shri. She married film producer Boney Kapoor in 1996 and took a break from cinema. She returned with a bang as a hapless Indian woman trying to prove her worth to her family in English Vinglish. Her last film MOM was her 300th film and she won rave reviews for this thriller.

SoulPrints salutes Sridevi for giving to Indian cinema a charm so vibrant and a spirit so vivacious. We will miss you Ms Hawa Hawai. 54 is no time to go.

This is a SoulPrints tribute to the one and only Sridevi, the 'Roop ki Rani' of Indian Cinema.