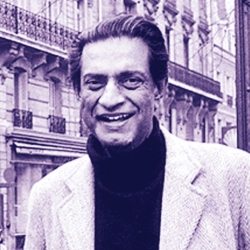 His creativity is a legacy. His stories will be retold for generations. His magic with cinema will be eternal. Much like the childlike grin of his most remembered character Indir Thakrun, the old aunt in Pather Panchali. Yes, Satyajit Ray was much more than all the awards and titles he was bestowed upon. He was a fiction writer, publisher, calligrapher, illustrator, music composer, graphic design and film critic. A filmmaker par excellence.

The enigmatic Ray was a towering personality in the world of cinema. Standing 6'4" tall, his artistic ideals and creative thoughts were a notch above. His career as a commercial artist from 1943-1956 evolved into a raging passion for filmmaking. He founded Calcutta's first film society in 1947 and made his first film that went on to win the Grand Prix at the Cannes Festival. Pather Panchali. The movie was one of his most remarkable contributions to Indian cinema and along with Aparajito and Apur Sansar, became the famous 'Apu Trilogy'. He later went on to make many noteworthy films including Jalsaghar, Kanchenjunga, Charulata, Ashanti Sanket, The Chess Players, The Home and The World, Ganashatru and Agantuk.

Japanese film-maker Akira Kurosawa very rightly said, "To have not seen the films of ray is to have lived in the world without ever having seen the moon and the sun. "

Did you know that the French President Francois Mitterrand conferred the Legion of Honor on Ray, not by inviting him to France but by landing on his doorstep in Kolkata. Such was the cinematic power and charm of Satyajit Ray. He also won a special life-time achievement award at the 1992 Academy Awards, the Bharat Ratna, 32 Indian National Film Awards and was member of the jury at the Berlin International Film Festival in 1961 and Venice film Festival in 1932.

The passing away of the master storyteller in April 1992 was a big blow to the Indian art and literature fraternity, as well as to his thousands of admirers the world over. Much like his beautiful characters he created with elaborate observation and raw emotions, Ray will always be the benchmark for independent cinema. SoulPrints raises its hat to this brilliant filmmaker.

This is a SoulPrints tribute to the ace film maker Satyajit Ray.