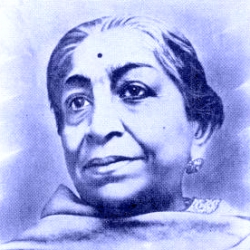 Born as Sarojini Chattopadhyay in Hyderabad in a family of achievers, she peaked right at her young age in academics, won the scholarship and found herself in the best of campuses in England, first at King's College London and later at Girton College, Cambridge. She found her partner at an early age, got married and turned out to be a proud mother of her daughter who went on to become the Governor of West Bengal.

It was in the wake of partition of Bengal in 1905, Sarojini Naidu joined the Indian national movement. This brought her in contact with the tall leaders such as Gopal Krishna Gokhale, Rabindranath Tagore, Muhammad Ali Jinnah, Annie Besant, C. P. Ramaswami Iyer, Mahatma Gandhi and Jawaharlal Nehru. She travelled the length and breadth of the nation delivering lectures on social welfare, women's empowerment and nationalism. She helped to establish the Women's Indian Association (WIA) in 1917. She was sent to London along with Annie Besant, President of WIA, to present the case for the women's vote to the Joint Select Committee.

In 1925, Naidu presided over the annual session of Indian National Congress at Kanpur as the Congress party president. She presided over East African Indian Congress in South Africa in 1929. Her gritty presence saw herself as one of the women protesters at the Dharsana salt works, Gujrat in 1930 during the salt satyagraha. She went to play a leading role during the Civil Disobedience Movement and was jailed along with Gandhi and other leaders. Sarojini Naidu served as the first governor of the United Provinces of Agra and Oudh from 1947 to 1949. This made her the first woman to become the governor of an Indian state. She was also the second woman to become the president of the Indian National Congress in 1925 and the first Indian woman to do so. Her courage and contributions were not confined to the fields of politics only. She was a renowned poet and contributed through her writing too. Her play "Maher Muneer" that she wrote at an early age of 12, fetched a scholarship to study abroad. The collections of her poems named "The Golden Threshold", "The Feather of The Dawn", "The Bird of Time" and "The Broken Wings" were published and admired by many.

This is a SoulPrints tribute to Sarojini Naidu, the nightingale of India.