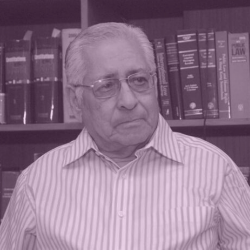 This Bombay born Parsi with an education from St Xavier’s college and thereafter from Government Law College, Mumbai, as a young & brilliant mind was spotted early to be awarded the  Kinloch Forbes Gold Medal in Roman Law and Jurisprudence. There was no stopping him as he turned out to become  Solicitor-General of India from 1977 to 1980. He was appointed Attorney-General for India on 9 December 1989 up to 2 December 1990, and then again on 7 April 1998, a post he held until 2004. Such was an illustrious career he had in is life.

He always came across as a warm and incredibly intelligent practitioner of the law during an era that was witness to facts and the interpretation of consideration.

As a most friendly with a strikingly pleasant personality, Sorabjee often offered his services for free, working pro bono. He worked on the Citizen's Justice Committee which represented the 1984 anti-Sikh riots victims.

Sorabjee who followed in the footsteps of his mentor Nani Palkhivala, made a significant contribution to the interpretation of constitutional law in independent India. He was a champion of free speech and citizens’ civil liberties, and assisted Palkhivala in the landmark Golaknath and Keshavananda Bharati cases. Sorabjee firmly believed judges after retirement should keep away from political positions in the Rajya Sabha and elsewhere.

Sorabhjee’s life more than deserve to be celebrated. His love for Jazz, as they say, sometimes beat his passion for law. And it so happens that he departs as the world celebrates international Jazz Day.

In March 2002, Soli Sorabjee was awarded the Padma Vibhushan for his defense of the freedom of expression and the protection of human rights. In March 2006 he was appointed an Honorary Member of the Order of Australia, for his service to Australia-India bilateral legal relations. Justice K. S. Hegde Foundation Award in April 2006. Sorabjee held several offices in organizations of national and international repute.

India, the world, particularly the legal community loses its patriarch as he leaves a void that no one will ever be able to fill.

This is a SoulPrints tribute to Soli Jehangir Sorabjee