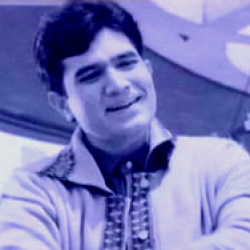 In 1965, at theAll India Talent Contest organised by United Producers and Filmfare, one boy rose above the 10,000 contestants. He was handsome. He was an excellent actor. He was made to be a winner. And he soon became a sensation. Rajesh Khanna was more than just a hero. He was a star. A super star, and the first ever in Indian cinema. His charming personality and mysterious smile won the hearts of women, young and old.

He made his debut in 1966 with Aakhri Khat. And then there was no stopping. He churned out hits after hits and was paired with the all the top actresses of the Hindi film industry. One of his most critically acclaimed performances was that of acancer patient in Anand. He immortalized on screen romance with his captivating smile and dialogue delivery. Aaradhana with Sharmila Tagore, Kati Patang with Ashe Parek and Aap Ki Kasam with Mumtaz, were come of his most popular movies. He was not just a romantic hero. In Hrishikesh Mukherjee's 1972 comedy,Bawarchi, he played a cook, and broke his stereotyped image.

He is said to have delivered 15 consecutive solo hits between 1969-1971 and was consideredthe highest paid actor in the 1970s and 1980s. He has won numerous awards for his acting.

He was posthumously awarded the Padma Bhushan and in 2013 at the Dadasaheb Phalke Academy Awards, he was bestowed the title of The first Superstar of Indian cinema. He also has stamp in his honour and a road too.

This is a SoulPrints tribute to Rajesh Khanna