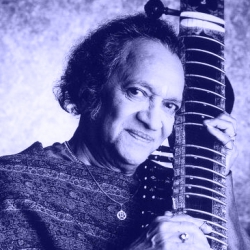 The lanky figure with the long hair adding flair to his  personality and the dominating presence that he had making the musical  instrument Sitar what it is today on the world stage is unforgettable. Born as  Robindro Shaunkor Chowdhury in Varanasi to a Bengali family, as the youngest of  seven brothers, he spent his youth touring India and Europe with the dance  group of his brother Uday Shankar. By the age of 13 toured and learned to dance  and play various Indian instruments. His awesome talent found him and led him  to discover Western classical music, jazz, cinema and he became acquainted with  Western customs.

After giving up his dancing in 1938, he went on to study  sitar playing under court musician Allauddin Khan. After finishing his studies  in 1944, Shankar worked as a composer. Shankar recomposed the music for the  popular song "Sare Jahan Se Achcha" at the age of 25. He began to  record music for HMV India and worked as a music director for All India Radio  (AIR), New Delhi, from February 1949 to January 1956. Shankar founded the  Indian National Orchestra at AIR and in his compositions he created fusion of  Western styles with classical Indian instrumentation. He scored the music for  the Apu Trilogy by Satyajit Ray among the others.

It was the same year in 1956, he began his tour to Europe  and the Americas, thus conquering the world of music. Playing Indian classical music and increasing  its popularity abroad in the 1960s through teaching and performances, he  developed his association with many incredible musicians. Ravi Shankar recorded  most of his albums in the 1950s and 1960s for Bock's label with his friend  Richard Bock who was the founder of World Pacific Records.  The Byrds were influenced by Shankar's sound  and incorporated some of its elements in theirs. These led to Shankar's association with violinist Yehudi Menuhin and Beatles guitarist George  Harrison. And eventually to some incredible collaborations in Western music by  writing his compositions for sitar and orchestra, and toured the world in 70's  and 80's. The iconic track "Norwegian Wood (This Bird Has Flown)" was  a result of Shankar's influence on George Harrison and this created a new sound  in the world of rock music. Shankar's association with Harrison greatly increased Shankar's popularity and Ken Hunt of AllMusic stated that Shankar had  become "the most famous Indian musician on the planet" at that time.  In 1967, he performed at the Monterey Pop  Festival and won a Grammy Award for Best Chamber Music Performance for West  Meets East, a collaboration with Yehudi Menuhin.

What followed were, a western branch his Kinnara School of  music in Los Angeles, an autobiography 'My Music, My Life', a score for the  movie Charly, a spectacular performance at Woodstock Festival, Chairing the  department of Indian music of the California Institute of Arts, offering  lectures at colleges and Universities, composing a concerto with sitar for the  London Symphony Orchestra and a second Grammy too for his concert album. He  served as a nominated member of Rajya Sabha, the upper chamber of the  Parliament of India. In 1999 Shankar was awarded India's highest civilian  honour, the Bharat Ratna.

He was maestro who developed a distinct style of his own  incorporating influences from the varied rhythms of Carnatic music and also had  his unique pattern of performing. Beginning with pulsing solo influenced by  dhrupad genre that was followed by a section with tabla, his performances  featured compositions associated with khyal stye and he often closed with a piece  inspired by thumri genre. He had his unique way of playing with the bass octave  on the sitar creating an incredible sound through stops and strikes  rhythmically.

Ravi Shankar lived a legendary life giving the most to the  world of music and in the process found love at different stages of his  celebrated life. Norah Jones and Anoushka Shankar were his daughters who have  already conquered the world with their own contemporary and individual styles in  music and across geographies.

"If you like our tuning so much, I hope you will enjoy  the playing more." Those were his witty words in amusement when the crowd  broke into applause after the musicians had tuned up on stage at the start of a  concert. Celebrated with a title Pandit, he was an incredible Indian musician  and composer who was one of the best-known exponents of the sitar in the second  half of the 20th century as a composer of Hindustani classical music. Ravi  Shankar continued to perform up until the end of his life, his last being with his  daughter Anoushka on Nov'12 in California, thereby creating an era of music  that will resonate forever.

This is a SoulPrints tribute to Pandit Ravi Shankar.