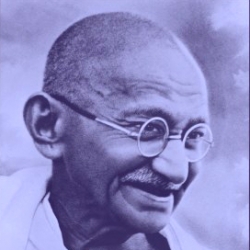 Eleven beautiful thoughts from The Mahatma that will stay with us forever.

“Happiness is when what you think, what you say, and what you do are in harmony.”

What a wonderful thought to express his pursuit of happiness. As a humble boy from a middle class family in the small town of Porbandar, Gandhi was a mediocre, shy and timid student who took up this incredible journey that led the nation to freedom.

“When I admire the wonders of a sunset or the beauty of the moon, my soul expands in the worship of the creator.”

As a nature lover and an admirer of God’s creation he appreciated the essence of having faith and worshipping the creator. It was this faith which he believed helped transform a nation when put to action.

“You must not lose faith in humanity. Humanity is an ocean; if a few drops of the ocean are dirty, the ocean does not become dirty.”

These profound words echo his experience during his stay in South Africa. As it is said that his life underwent a change and he developed most of his political ideas there. It is after his experience there that he decided to dedicate himself completely to the service of humanity.

“The best way to find yourself is to lose yourself in the service of others.”

Self-discovery it was for this young lad then which later became good enough to change history. Incredible was his act of losing himself in service to others which can only be a thought to many. Such was his feat that it still inspires motivates the world.

Sounding so excitingly adventurous, this amazing attitude can only depict his undying spirit to do and make the change. This unending urge to learn, to excel and to live to change is what made him one of the great souls that ever lived on the face of this earth.

Understanding and experiencing love is to live. These words only go to show the admirable life that he lived with his unadulterated love for a nation and entire humanity.

“The weak can never forgive. Forgiveness is the attribute of the strong.”

True to his words this Mahatma had the courage of the strongest to fight for the change, in his own non-violent way that paved the way for a free India.

“Non-violence is the highest ideal. It is meant for the brave, never for the cowardly.”

The bravest soul that he was and is in a billion hearts, he will always be remembered as the personification of non-violence across this world.

“An eye for an eye only ends up making the whole world blind.”

He opened the eyes of the people to the very essence of true freedom that was and will always be achieved through peace.

“You must be the change you wish to see in the world.”

Mahatma Gandhi is the name of that change that inspired many nations and it will only grow stronger to inspire the world to change for the better.

“My life is my message.”

Yes…without doubt it was and will always be…for generations to come.

These are select set of quotes by Mahatma Gandhi, used as an exclusive tribute by SoulPrints.in