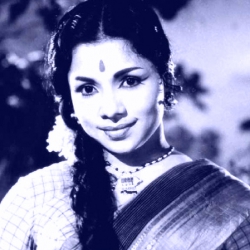 Her name was featured in the Guinness World Records in 1985 for acting in more than 1000 feature films. By 2015, the count went up to a whopping 1500. But it is not just the number of films that defines the cheery and goofy Manorama. It is her passion for acting and beautifully essayed roles that won her admirers across India.

Born as Gopishantha in Mannargudi, Tamil Nadu, Manorama washer stage name where she gained popularity. She gradually got roles in the Tamil film industry and Hindi cinema as well. She is well known for her perfect comic timing and rib-tickling dialogue delivery.

Some of her best Tamil films were "Galatta Kalyanam", "AnbeVaa", "Ethir Neechal" and 'Thenmazhi'. Her pairing with fellow comedian Nagesh was a recipe for a superhit film. Her entry into Hindi cinema was with the iconic comedian Mehmood in Kunwara Baap in 1974.

When asked about her delving in supporting roles by a BBC interviewer, she said "If I had chosen to act only as a heroine, then I would have disappeared from the scene long ago. So I decided to take up comedienne roles. I survived in the industry for nearly six decades."

Not just survived, but spread plenty of smiles to audiences all over. When she started doing grandmother roles in the later stages of her career, she was given the name Aachi. Manorama also pocketed a few prestigious awards along the way and thousands of fans.

This is a SoulPrints tribute to Manorama