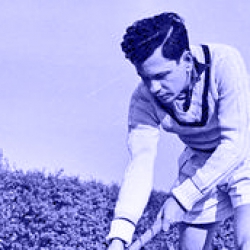 Initially found himself to be very interested in football and even went on to become an accomplished player of the game. But his talent with the stick overpowered his talent with his feet. Spotted by Dickie Carr from the Indian team that won gold at 1936 Olympics, the young Claudius quit football for hockey. It is said that, Carr threw a hockey stick and asked him to come and play and the rest is history. His extra ordinary talent in field hockey stood out and it did not take him much time to find himself playing for India.

Leslie Claudius went on to become the star performer for Indian hockey during which time India won Olympic gold in 1948, 1952, 1956 and a silver in 1960. He became the first player in this sport to compete in four consecutive Olympics and also the first to earn a hundred international caps. He deservingly captained the Indian team with the most decorated player of Indian Hockey Dhyan Chand as the coach. Fellow hockey Olympians such as Gurbux Singh, Keshav Dutt and Vece Paes, who played alongside him, remembered Claudius as a simple man with great qualities that made everyone love and respect him.

Claudius went on to become the Manager for the Indian Hockey team in 1978 and during that time his personality stood out and it is said that he was instrumental in reviving the India-Pakistan hockey series. He was a legend of Indian Hockey indeed. Claudius was awarded Padma Shri in 1971 and he has his name mentioned in the Guinness Book for having won the most number of Olympic medals in field hockey.

This is a SoulPrints tribute to Leslie Walter Claudius