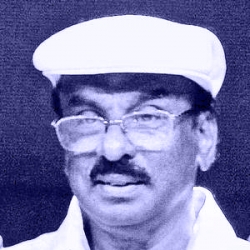 The Malayalam Cinema of 1970s, 80s and 90s witnessed the best in movie making history through this incredible director who went on to make more than 150 films in various Indian languages. Born in Kozhikode, Kerala and starting his career as an art director, Irruppam Veedu Sasidaran popular known as I V Sasi directed his first film when he was 27. His first official directorial debut film was ulsavam and with that he carved a niche for himself. His uniqueness and directorial style distinctively stood apart in all his films. I. V. Sasi has directed more than 150 odd films over a span of 34 years and has constantly delivered super hits. One of his best and the boldest creations was Avalude Raavukal which was dubbed into many other Indian languages, also turned out to be the second film in Malayalam to be rated ‘adults only’.

I V Sasi has the distinction for having introduced some of the biggest names in south Indian cinema such as Mammooty and even Mohanlal. He has directed the one and only Kamal Hassan in hit movies such as Guru, Allauddinum Arputha Vilakkum, Karishma and Eeta. He also introduced the superstar Rajinikanth to Malayalam cinema through Allauddinum Arputha Vilakkum and went to make Kaali with him in the lead. He has directed Hindi movies as Patita (Mithun Chakraborty), Anokha Rishta (Rajesh Khanna and Smita Patil), Pratishodh (1980), Karishma etc. His most critically acclaimed Hindi film was Anokha Rishta with Rajesh Khanna in the lead which was a remake of Kanamarayathu.

I V Sasi will always be remembered for his courage to experiment with new themes and innovative patterns in film making. His novel style was clearly evident in his movie making with infused energy and dynamic camera work. One of his best cinematic work will be his interpretation of the Moolah Rebellion in 1921, which also won the ‘most popular film’ award.

He was awarded the J C Daniel Award which is the highest award in Malayalam Cinema.  Mohanlal starrer Mrigaya won him the the Best Director award 2015. He won the The Nargis Dutt Award for the best feature film on National Integration - Aaroodam.  Best Director awards twice from Filmfare - South and also a Lifetime Achievement Award in 2015.  He was awarded the Lifetime Achievement Award by Ernakulam District Pravasi Association Riyadh (EDPA) for his eternal contribution to the Malayalam Film Industry in 2016

I V Sasi will always be remembered a director who gave us superstars.

This is a SoulPrints tribute to the ace director I V Sasi.