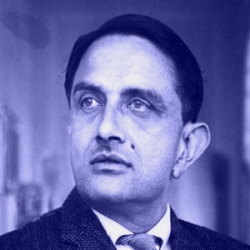 If Indians are proud of the country's scientific  prowess and progress in space research, the credit goes to a talented and  committed young man - Dr Vikram Sarabhai. Born in 1919, Vikram Sarabhai grew up  to be a promising young scientist and innovator. His scientific temper and  academic brilliance led him to the called the Father of Indian space program.  His most significant contribution is the establishment of the Indian Space  Research Organization (ISRO). He persuaded the government of India on the  importance of a space program for a developing nation. He along with Dr Homi  Bhabha pioneered the establishment first rocket launching station in Thumba,  near Thiruvananthapuram. The inaugural flight was launched in 1963, thanks to  the herculean efforts of ISRO mentored by Dr. Sarabhai.

He was also instrumental in a landmark dialogue with  NASA, which resulted in the launch of Satellite Instructional  Television Experiment (SITE). He also started a project for the launch of India's  first satellite, Aryabhata, which took off in 1975 from a Russian Cosmodrome  after his death.

Dr Sarabhai also gained popularity as an  institution builder. A large number of prominent institutions in diverse fields  were established because of his remarkable efforts. Some examples include the  Indian Institute of Management, Ahmedabad, Vikram Sarabhai Space Centre,  Thiruvananthapuram, Faster Breeder Test Reactor (FBTR), Kalpakkam and  Electronics Corporation of India Limited (ECIL), Hyderabad. The Physical  Research Laboratory (PRL) in Ahmedabad was launched in 1947, when he was just  28 years old.

He also served as the Chairman of the Atomic  energy Commission. SoulPrints applauds the magnificent contribution of this  brilliant scientist.