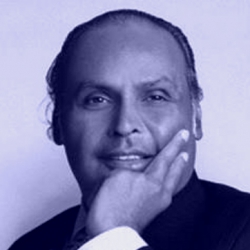 Rising from a humble background, Dhirajilal Hirachand 'Dhirubhai' Ambani conquered the world of trade and politics with his business acumen. His passion to take risks led him to become India's most prominent business tycoon and Asia's top 50 businessmen. He was the founder of the Reliance Industries in 1977 and by 2007, the combined fortune of the Ambani family was a whopping $60 billion, making them the third richest family in the world. After his death in 2002, his sons have split but still continue to grow the Reliance empire.

'Our dreams have to be bigger. Our ambitions higher. Our commitment deeper. And our efforts greater.'

'We cannot change our rulers, but we can change the way they rule us.'

'Challenge negative forces with hope, self-confidence and conviction. I believe that ambition and initiative will ultimately triumph.'

'If you don't build your dream, someone else will hire you to help them build theirs.'

'Between my past, the present and the future, there is one common factor: Relationship and Trust. This is the foundation of our growth.'

'You have to take the calculated risk, to earn something.'

'Often people think opportunity is a matter of luck. I believe opportunities are all around us. Some seize it. Others stand and let it pass by.'

'I consider myself a pathfinder. I have been excavating the jungle and making the road for others to walk. I like to be the first in everything I do.'

This is a SoulPrints.in tribute to the visionary Dhirajilal Hirachand 'Dhirubhai' Ambani