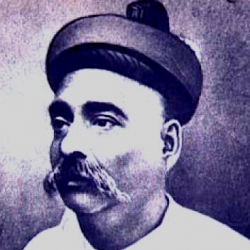 He was the first leader of the Indian Independence Movement. He was called the Father of the Indian Unrest. He was honoured with the title of "Lokmanya" (accepted bythe people). Bal Gangadhar Tilak was an Indian nationalist, lawyer, activist, teacher and social reformer. He was strongest advocates of Indian consciousness and the popular Swaraj (self-rule) movement.

As a tribute to this stalwart in Indian Independence, SoulPrints makes a compilation of his most appreciated words.

'Swaraj is my birthright, and I shall have it'

'If God put up with untouchability, I will not call him God'

'Progress is implied in independence. Without self-government either industrial progress is possible, nor the educational scheme will be useful to the nation...To make efforts for India's freedom is more important than social reforms.'

'The problem is not lack of resources or capability, but the lack of will'

'If we trace the history of any nation backwards into the past, we come at last to a period of myths and traditions which eventually fade away into impenetrable darkness.'

'We spend our days waiting for the right path to appear in front of us, but what we forget that paths are made for walking, not for waiting'

This is a SoulPrints.in tribute to Bal Gangadhar Tilak