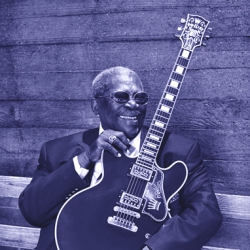 There are many artists who turn out to be the biggest stars that we all go in awe of their music. Yet there few who come along to make a really special place for themselves and themselves alone as they create their own space. They are innovators. These few create something special, something so magical, that nobody has done anything like that before. And such was an inevitably amazing artist he was, growing up in a farm with all the difficulties that we can possibly imagine around his life given the time and the condition the world that he lived in. With that thing called 'the Guitar' this little boy stepped into the big town unperturbed by the new surroundings against all odds. And grew up to be the one destined to create, develop a very special and unique style of his own in playing guitar, and we wonder if he knew then that this world will turn up in unison to call him the 'king of Blues'.

He was personified, in every sense the 'King' of blues, without doubt. Right into his energetic eighties, the king performed to his best for billions of fans like me who can forget what life has in store for us for those awesome four to six minutes when listening to a BB King's track. An absolutely incredible career spanning nearly 70 years, Riley B. King was not only the undisputed king of the blues but a mentor to scores of guitarists, including Eric Clapton, Otis Rush, Buddy Guy, Jimi Hendrix, John Mayall and Keith Richards. This undisputed king recorded more than 50 albums and toured the world, often performing 250 or more concerts a year.

An amazing story teller, the big king played a Gibson guitar that he affectionately called Lucille, interestingly named after the woman who created the confusion and the fire in the story he narrates through the song. His style was unusual and included beautifully crafted single-string runs punctuated by loud chords, subtle vibratos and bent notes. He developed a call-and-response between him and Lucille. King used it to full effect on his signature song, "The Thrill is Gone".

This 15-time Grammy winner was spotted by a preacher uncle who taught him to play guitar, and he honed his technique in abject poverty in the Mississippi Delta, the birthplace of the blues. Referring to the place of his origin and the musical 'cult' style that he created BB King said "People all over the world have problems. And as long as people have problems, the blues can never die."

An awesome ride that influenced a generation of rock guitarists by the 'king of blues' ends, but the thrill will never be gone. RIP BB King. A life so celebrated lives on... imprinted to eternity.

This is a SoulPrints tribute to the American blues singer, songwriter, and guitarist Mr. BB King.

The world of music, especially the blues one will miss him...always!